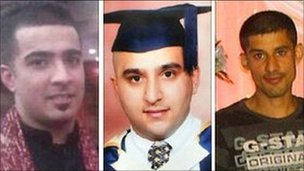 Wednesday, October 5 2011:
18:50: West Midlands Police has dubbed the investigation into the deaths as Operation Pointer. Since the August updates, more people were arrested, eventually bringing the total to fourteen arrested (the most recent being a 21 year old Quinton man arrested on suspicion of murder, subsequently bailed pending further enquiries).

As of October the 5th, nine men have appeared at Birmingham Crown Court charged with murder and remanded in custody pending their trial. Four men remain on police bail having been arrested on suspicion of murder. Another 28 year old man appeared at Birmingham Magistrates on the 22nd of August having been charged with perverting the course of justice.

The police are urging anyone with more information about the incident to contact the Operation Pointer incident room via their central contact number, 0345 113 5000. Alternatively, independent charity Crimestoppers can be contacted anonymously on 0800 555 111.

Sunday, August 21 2011:
19:50: BBC News is reporting that a fifth man, Liam Young from Winson Green, has now been charged in connection with the killings.

Saturday, August 20 2011:
19:00: Two more people have been arrested: a 33 year old man, arrested at his home in Smethwick on Friday morning on suspicion of murder, has been released on bail; the ninth person is 28 year old Liam Young, arrested in Winson Green. Four people remain charged in connection with the murders; Ian Beckford, 30, from Quinton; Joshua Donald, 26, of Kelsall Croft, Ladywood; Adam King, 23, of no fixed address and a 17-year-old who cannot be named for legal reasons.

17:15: the open air funeral has finished and mourners are largely dispersed; traffic is still fairly heavy in the locality. Prayers were held for the three individuals; Sheikh Muhammed al Yaqoubi addressed the assembled crowds and Saqib Majid, the cousin of Ali and Musavir, read out a poignant tribute.

16:15: an open air funeral is currently taking place in Summerfield Park, Birmingham to commemorate the deaths of Jahan, Ali and Musavir. Prayers have been said and some 20,000 people from all faiths and communities have attended to show their support for the deceased and their families. Tariq Jahan has continued to urge the communities to remain united and at peace.

Motorists have been asked to park responsibly and respect that local residents may need to enter and leave their homes on the day. The area around Summerfield Park is residential and highly built-up; there is only limited parking available at Summerfield Park. There are bus services every 5 minutes along the Dudley Road (www.nxbus.co.uk or TravelineMidlands.co.uk for live timetables and route planners). There may be delays to travel on the routes near to Summerfield Park. Traffic restrictions have been in place between midday and 16:00; the area will remain congested until this evening.

Also, West Midlands Police earlier released an update on the number of arrests and charges filed as a result of last week’s disorder:

So far we have results for 80 cases. Of these:

Wednesday, August 17 2011: A fourth man has tonight been charged in connection with the deaths.

Monday, August 15 2011: West Midlands Police today announced the arrest of a SEVENTH individual in connection with the Winson Green deaths last week. A 30 year old man from Birmingham was detained on suspicion of murder shortly after 10am today (August 15). To date, thre men aged 17, 23 (Adam King of Kings Norton) and 26 (Joshua Donald of Ladywood) have been charged with murder and have appeared before Birmingham Crown Court. Three other people (three males aged 16, 27 and 32) have already been bailed pending further enquiries.

A third vehicle, a black Audi 3, was recovered late on Saturday night and according to West Midlands Police “is undergoing forensic examination by officers”. Their press release goes on to say,

DCI Anthony Tagg from Force CID said: “We are now confident that we have recovered all three vehicles which we believe were involved in the murder in Dudley Road in the early hours of Wednesday 10 August.” He added, “enquires are ongoing and we are still actively seeking a number of people in relation to the murder enquiry. We would appeal for anyone with information about the incident to contact us.”

A team of 70 detectives and 15 police staff are continuing to work on the investigation into the deaths of Shazad Ali, Abdul Musavir and Haroon Jahan in Winson Green.

Earlier on Sunday August 14 it was announced that three individuals had been charged in relation to the Winson Green killings of Shazad Ali, Abdul Musavir and Haroon Jahan. The most recent arrestee, Adam King, 23, from Kings Norton, Birmingham, appears in court on Monday the 15th of August.

BBC, 14/08/2011: Joshua Donald, from Kelsall Croft, Ladywood, and the teenager from Winson Green, who cannot be named, appeared before magistrates earlier. They will appear at Birmingham Crown Court on Monday.

Mr King will appear at Birmingham Magistrates’ Court on Monday.

From BBC News on Saturday:

A 17-year-old male from Winson Green and Joshua Donald, 26, from Ladywood, have been charged with three counts of murder each. The pair are due to appear before Birmingham magistrates on Sunday. (On Sunday, they were remanded in custody and will be appearing in court on Monday.)

BBC News covered the Peace Rally, held in Summerfield Park, where up to 5,000 people attended. Their full articles are here and here. 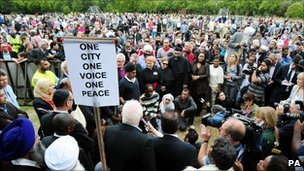 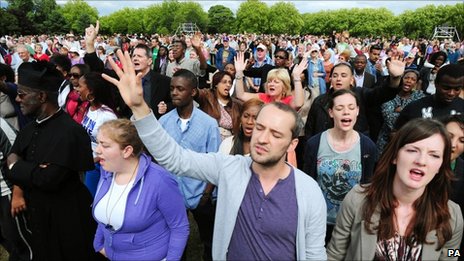 Some of the 5,000 attendees of the Summerfield Park Peace Rally

Amjad Hussein owned the business in which Ali, Musavir and Jahan worked. Speaking to the BBC at the rally, he said, “Today everyone’s together and it will stay like this. It’ll bring the community together and it definitely has made a difference.” West Midlands Police Chief Constable Chris Sims, Mike Whitby and Lord Mayor Anita Ward also attended.

Tariq Jahan made an emotional and poignant speech (clip courtesy of the BBC) where he emphasised just how much the unity expressed in the community meant to him, that the deaths of the three were not in vain and his hope that the community would remember them.

The BBC’s Anthony Bartram spoke to people at the rally:

From the BBC article:

West Midlands Chief Constable Chris Sims also spoke at the event, along with Birmingham City Council leader Mike Whitby. “We are working together, politicians, faith leaders, community leaders – the desire for normality in this city is tangible,” said Mr Whitby.

Before the event, Mr Sims said: “Officers have been overwhelmed by the support shown by the public and it felt a million miles from the debates apparently raging in Westminster.” Sentencing of those in court had been “justifiably harsh”, he said. But he added people must not abandon compassion for some “damaged young people who have been caught up in these incidents”.

On Saturday, the first most people heard about the arrests was when West Midlands Police (@WMPolice) tweeted:

West Midlands Police said about 5,000 people attended a peace rally on Sunday afternoon in Winson Green, the neighbourhood where the men were killed.

Tariq Jahan, the father of 21-year-old Haroon Jahan, said: “Seeing everyone here gives me strength in my heart. He didn’t die in vain and I hope this community will remember them.”

On Saturday, A West Midlands Police spokeswoman said a 16-year-old boy and a 32-year-old man arrested on suspicion of murder had been bailed pending further inquiries. Two other men aged 23 and 27 who were arrested on Friday remain in police custody.

‘Shock and devastation’
Earlier, Tariq Jahan, father of Haroon Jahan, thanked people for their condolences. “I have received much mail internationally,” he said. Mr Ali and Mr Musavir’s uncle, Abdullah Khan, 58, said his nephews were “hard-working young men”. He said: “I remember talking to Shazad a few days before and he was looking forward to the birth of his first child in a few months, but that was not meant to be.

“We have lost two sons, which has left their family in complete shock and devastation.”

A peace gathering has been arranged at Summerfield Park in Dudley Road, Birmingham, on Sunday at which the three men will be remembered.

Police and locals have told me that they expect upwards of 10,000 people to attend the Peace March on Sunday; the funerals of Haroon Jahan, Shazad Ali and Abdul Musavir are going to also be held in Summerfield Park on Thursday – figures of up to 30,000 attendees have been talked about with people from Leicester, Manchester, Bradford, Liverpool and London coming to pay their respects.

West Midlands Police detectives have also been investigating the deaths and today appealed for help from the local community to identify a vehicle seen in the area at the time of the incident. The vehicle, a black Audi A3, was seen by witnesses near the scene and police are asking for anyone with information or anyone who knows who was driving it at that time to come forward.

Officers have also revealed that they have arrested a further two people late last night on suspicion of murder. The two men aged 23 and 27 from Birmingham are currently helping officers with enquiries. Police are still questioning a further three people aged 16, 17 and 26 who were arrested on Thursday 11 August. Warrants have been granted for their further detention until 10pm tonight. A sixth man, aged 32, arrested a short time after the incident has been bailed while further enquiries take place.

Enquiries into the murder of Shazad Ali, aged 30, Abdul Musavir and 31 and Haroon Jahan aged 20 are continuing, with a team of over 70 detectives and 15 police staff working on the enquiry. As part of the investigation. officers have also recovered two vehicles. A black Mazda registration CN06 SHZ, which was found close to the scene burnt out and a black Ford Fiesta BT11 GTY, which has also been recovered by police.

Det Supt Richard Baker, who is leading the murder investigation, said: “Enquiries are ongoing into these vehicles, but officers are appealing for anyone who has knowledge of the owners or drivers of these vehicles in the days and weeks before the incident to come forward. Officers are working hard to bring those responsible for these deaths to justice. The response from the community has been overwhelming. We have seized over 400 exhibits and taken over 70 witness statements from people who have come forward and provided information. A significant amount of CCTV has been recovered and officers are looking through this and over 130 businesses and houses have been visited in relation to house to house enquiries.

“I would appeal to anyone with information to come forward and speak to police- the smallest amount of information could be critical in order to get justice for the families.We understand that people may be unsure or fearful about providing evidence to the police. I can reassure communities that West Midlands Police have a proven track record of successfully protecting the identity of significant witnesses and we will work closely with CPS to enable the full scope of legislation to be utilised to protect witnesses.”

Det. Supt. Baker also paid tribute to the families of the victims and the local community.

He said: “The communities of all faiths have responded very positively together in relation to providing information and we would not be in the position we are without their support.

“Three young men died in the most tragic and unnecessary circumstances on Wednesday morning. These men were sons, brothers, uncles and cousins and this has devastated the families and local community. In order to ensure that justice is brought against the main offenders as swiftly as possible it is critical that the community continue to provide information in relation to this incident.”

Enquiries into the collision are ongoing-Anyone who witnessed the collision or has information in connection with the incident is asked to contact West Midlands Police on 0345 113 5000.