An odd couple of bedfellows, but both quite significant events that took place last weekend – Birmingham hosted the Gay Pride weekend, seeing hundreds and thousands of people converge on the second city for a weekend of festivities, celebration, drinking and general madness… My lesbian housemate certainly seemed to enjoy herself, though she’s not shown me some of the snaps from her weekend exploits yet!

Unfortunately, as is customary with any big outdoor event, it rained all weekend. Oops. However, it doesn’t seem to have dampened peoples’ spirits, as is evidenced by taking a look at the photos from the weekend on the BBC Birmingham pages.

Last weekend also marked the start of Tolkien Weekend 2007 – something I’m far more interested in 🙂 What’s not so well-known is that J.R.R. Tolkien (more info on the BCC pages) drew a lot of inspiration from the scenery in and around Birmingham when he was writing his Lord Of The Rings saga (as he lived in Birmingham at the turn of the century), and a lot of that which he drew his inspiration from is still around for all to see today. Buildings like Perrott’s Folly (just down the road from me in Edgbaston, and across the way from the Ivy Bush, the pub where Tolkien used to drink) serve as a mysterious reminder to those who are fans of his work as to how he even partly envisioned his amazing universe in the first place. The Folly gave Tolkien the spark for his idea of the Two Towers of Mordor- the Folly was built in line with the old water tower, and when you view them from a distance the similarity is striking.

Other landmarks include Sarehole Mill and Moseley Bog, the blueprint for Fangorn and the Old Forest, as well as various places in and around the Midlands where Tolkien grew up. Tolkien didn’t just derive inspiration from Birmingham however, and there are many guides (including this one by Simon Rose) detailing in much greater depth many of the other buildings and locations whose influence can be seen in his later writings.

Photos from the 2007 Tolkien Weekend are available here, here and here. 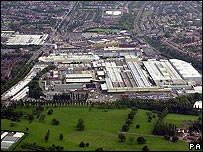 In other good news, Longbridge will be officially back in action from today – the 29th of May – after it was announced that Nanjing Automobile are not only making Longbridge their EU headquarters, they are reopening the factory for production and using the factory as an R&D facility for new development. Since buying the company in 2005, Nanjing has invested many millions of pounds into the facilities and have long said they have wanted to resume production at the facility. They’ve also premiered several new models of MG vehicles based on old Rover designs at this year’s Shanghai Automobile Show, and now seem set to scale up production of new vehicles. (More info here, here and here.)
Credit for all photos: BBC News Online